Ruben Östlund Wants to Provoke You

Ruben Östlund Wants to Provoke You

"The Square is a sanctuary of trust and caring. Within it we all share equal rights and obligations."

Swedish satirist Ruben Östlund follows up his 2014 hit Force Majeure with another devastating dramatic comedy critiquing the values of a rarified world. His target this time is the modern-art scene, as Christian (Claes Bang), chief curator at a Swedish museum, endures a pileup of mishaps — a mugging, a doomed viral marketing campaign, an awkward sexual encounter with the American journalist profiling him (Elisabeth Moss), and a black-tie performance gala gone terribly awry — that force him to question his own role in society. Also at the centre of Christian’s personal and professional maelstrom is the “Square” of the film’s title, an art exhibition comprising a white-marked space in which viewer/participants are asked to vow to be accountable to each other.

During TIFF ’17, Östlund was interviewed by another burgeoning satirist, Toronto writer-director Maxwell McCabe-Lokos, whose second short film, Midnight Confession, a seedy comedy about self-delusion, premiered at the Festival. The two filmmakers discussed The Square’s real-life inspirations — which run the gamut from humiliating YouTube videos to infamous punk-rock singer/shock tactician GG Allin — and why provocation is necessary in art. You can currently see The Square at TIFF Bell Lightbox — and participate in a recreation of the film’s luminous installation, situated in the Lightbox atrium.

A lot of your movies seem to take inspiration from real-life events. Incident by a Bank and Play were inspired by news items,* Force Majeure* was inspired by YouTube videos of people losing face. Did you draw from any real-life inspiration for The Square?

A lot of the things that happen to the main character, Christian, were either taken from my own life, or from my friend’s lives. For example, the condom incident happened to a friend of mine. However, the whole film started with the concept of the art installation — a white-marked symbolic place which reminds us about our common responsibility.

My film Play was about young boys robbing other young boys in the centre of Gothenburg, Sweden, where I live. The bystander effect was so obvious when we looked at these robberies — adults just standing by these kids. We decided to create a symbolic place to break that bystander effect and try to take action.

Were the other art pieces in The Square — the piles of gravel, the chairs in the background, the monkey-man performance artist — invented for the film or inspired by something you’d seen before?

A friend of mine said, "What you always see in contemporary art museums are mirrors and piles of gravel." I thought that was such a good summing up of what these installations are. So I started to look at people working with gravel in contemporary art and found the work of Robert Smithson, so it was inspired by him. With the chair installation, there’s a Swedish painter who paints beautiful pictures of piles of chairs. I wanted to create an installation with a sound that could disturb the characters [Christian and Anne, played by Bang and Moss] while they discuss a sensitive topic. The production designer Josefin Åsberg built a big tower of chairs, and we had someone pull a string to make it move.

So you actually made art for the movie!

You can call it whatever you want. (Laughs) But I made the piles of chairs and gravel.

The performance artist that Terry Notary plays is inspired by many things. For example, I don’t know if you know the American punk artist GG Allin. On YouTube, there’s a clip called "GG Allin in Boston." It’s completely crazy! Have you seen it?

That's who inspired Terry Notary’s character? GG Allin? That means a lot to me.

I have never seen something so anarchistic in my life. There’s no rules at all — he’s beating up women [in the audience]. It’s a very scary thing to look at, with these all silences and pauses; the whole room is vibrating. One of our goals was to have our premiere in Cannes in a room where everybody’s sitting in a tuxedo, so a tuxedo-dressed audience is looking at another tuxedo-dressed audience. Then, we slip in a performance artist who has removed all his civilized sides to become an animal who has instincts and needs.

Then he goes after the alpha males.

Exactly! That scene had a very simple structure: he comes in, chases away the alpha males, then it’s time for reproduction. That character was inspired by a Russian performance artist, Oleg Kulik, who did a performance at a museum in Stockholm [Fargfabriken] where he played a dog. It actually went so far they had to call in the police because he bit the chief curator’s daughter on the leg. That’s why the performance artist in the film is named Oleg. There are a lot of real-life inspirations. For example, when the museum accidentally cleans away the piles of gravel, that’s something that’s happened at many art museums.

__Incident By a Bank, the avalanche scene in Force Majeure, and now this scene in The Square with the performance artist in the dining room — you seem to have a knack for directing large crowds. It's hard to get such depth from background performers. How do you do it? __

I’m really happy you said that because it was a big part of the film. For example, in the scene when Christian gets robbed in the city square, we had around 800 extras. It’s very interesting when you’re directing extras, and we created an experiment where we set up the camera, drew a line, and then said to all the extras, "When you cross the line, that’s when you’re in the frame." We then decided to move the camera to see how they would change from being outside the frame to, "Okay, now the camera is looking at me." We wanted to capture how hard it is for human beings to be looked at from the outside.

The choreography of something like that is so much work.

I felt like a little dictator on set, talking to the masses. (Laughs) I thought it was quite fun to direct so many people at one time.

If you could say The Square lampoons one thing, it would be the high-end art market. Were there any specific artists or collectors you had in mind? I’m thinking of people like Damien Hirst and Larry Gagosian.

There are a couple who play themselves in the film. In real life, they donated 50 million Swedish kroners to the contemporary art museum in Stockholm. The art world has no problem making fun of itself. I know about Damien Hirst, but Julian Schnabel was someone who we were inspired by, and Dominic West is actually playing Schnabel. I’m sorry Dominic, I know I promised not to say anything! He knows Julian a little bit, but that’s who it is. 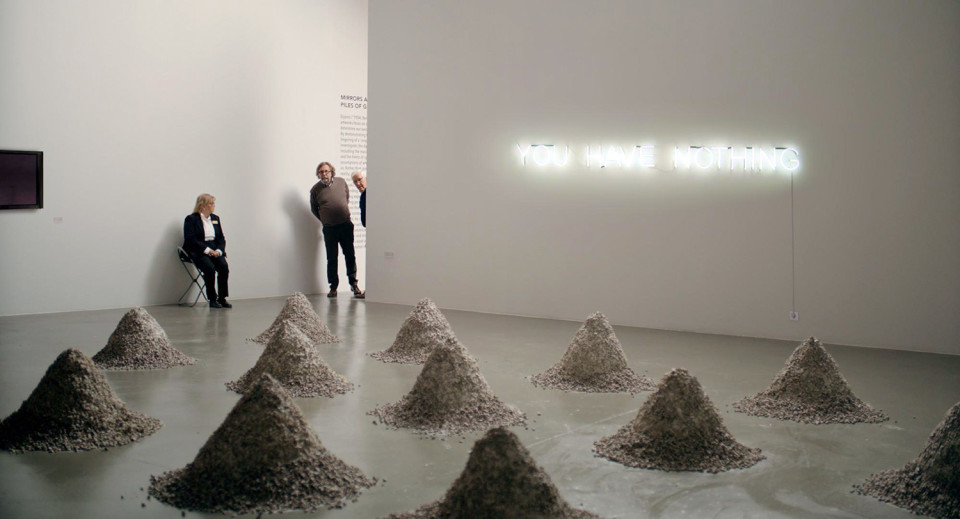 The art world has already been so maligned in popular culture. Why did you see it as an appropriate thing to ridicule?

The reason I wanted to use a contemporary art museum as the setting was so I could talk about the installation piece, The Square. But no matter which way I point the camera, I will try to make fun of any environment; I don’t think there’s any reason to point out the art world as specifically more ridiculous than anything else.

I visited 20 contemporary art museums around the world when I was writing the script and noticed that some conventions are repeated over and over again, which make the art scene much less interesting. You get into this white cube with a neon sign on the wall. You see a Warhol, a Giacometti. It’s the same thing wherever you go.

When Marcel Duchamp put his urinal [Fountain, 1917] into the museum, it was a provocation towards that room. He wanted us to think: "What should we place in these white cubes? What should the art scene be, what should we use it for?" Now, the provocation is not there. For example, the piles of gravel in the film, maybe the artists [and museums] have good intentions, but it’s the way you exhibit the art that is the problem. Shouldn’t art discuss what society should be doing, our roles as human beings? Of course, there’s a lot of good art, but there are things that are really conventional and repeat themselves.

Something else that comes up in your work is a male-protector kabuki act. There’s often a man making false gestures of protection for the sake of his family, a woman, or a child. It’s a theme that’s in Play, Force Majeure, and The Square. Do you see the mid-century model of a masculinity as obsolete or irrelevant?

I don’t know if it’s been relevant in many years. What I was quite interested in Force Majeure was that if you’re a man who’s been brought up in Western society, you’ve grown up with the idea since you were a child to sacrifice yourself. Whether for your country, for your football team, or for your family, that idea is part of the culture of how we look at being a man.

Force Majeure is very much connected to a certain stereotype that’s been created the culture. The Square is more personal for me. Christian is dealing with a lot of things I’m dealing with as a man in everyday life.

__Your films always attract some degree of controversy. Do you intentionally choose subjects that will be controversial? __

I think there’s a reason for being controversial if you can highlight issues in society. As long as you scratch the surface to show how our opinions may be wrong, I think it’s motivated. If you’re being provocative just for the sake of being provocative, I don’t think it really works. I love provocation because it always makes me think about what I’ve just seen. What makes me so angry about this? What makes me feel disturbed? I have to look at my own reaction when a provocation is used in the right way. With all the movies I’ve made, I want what’s happening on screen to be like a mirror for the audience to reflect on ourselves. So that's why I like to use controversial themes, or provocations in my movies. Yes.

The Sly and Savage Cinema of Ruben Östlund