TIFF Talent Accelerator is a programme that provides year-round mentorship to a select group of women who are emerging producers, directors, and screenwriters in Canada. A shortlist of candidates, created through an internal nomination system from TIFF’s network of industry contacts and alumni, will be presented to a committee that will select six outstanding women: two producers, two directors, and two screenwriters. With the goal of fast-tracking careers and projects, TIFF Industry will provide programming to spur artistic, professional, and project development.

This opportunity is made possible by generous donations to TIFF’s Share Her Journey campaign. 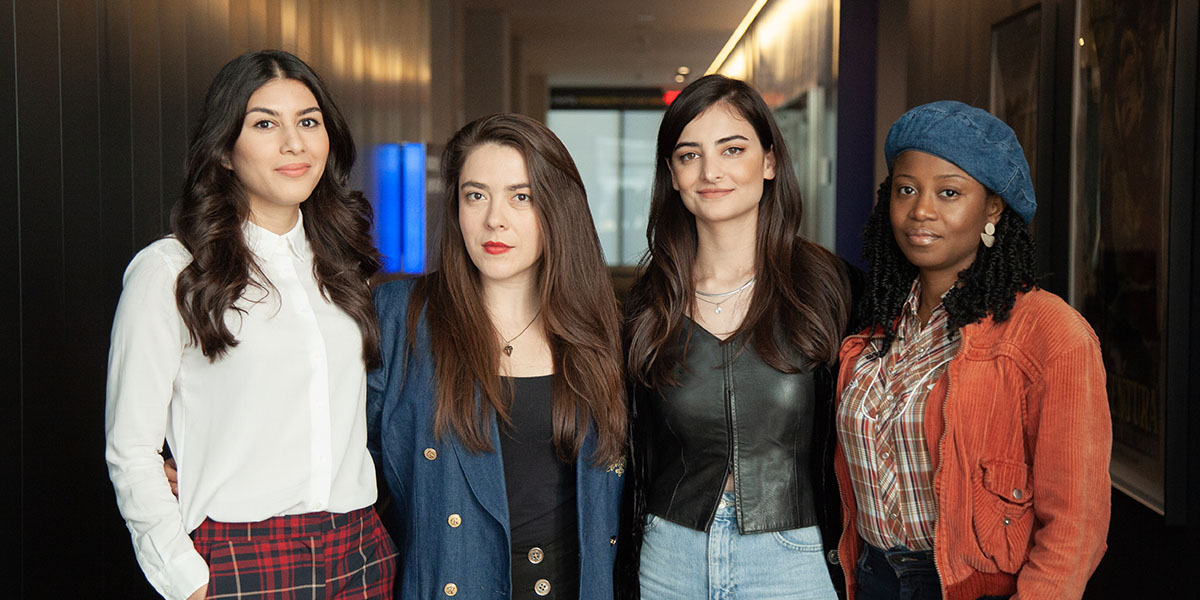 Carol Nguyen is a Vietnamese Canadian filmmaker, born and raised in Toronto, now based in Montreal. Her films often explore the subjects of cultural identity, silence, and memory. Her last film, No Crying at the Dinner Table, premiered at the Toronto International Film Festival and had its international premiere at IDFA 2019, where she was additionally invited as the Opening Night speaker. In 2020, No Crying also received the Jury Prize for Short Documentary at SXSW. Nguyen is a 2018 Sundance Ignite fellow and a TIFF Share Her Journey ambassador. Recently, her project The Visitors was selected for the IDFA Project Space 2022, a development, and her newest short Nanitic is set to premiere at TIFF 2022. Today, Nguyen is writing and directing several projects, including two feature films as well as an animated short.

Mahsa Razavi is a Toronto-based filmmaker from Iran. She studied Social Sciences and Communications at the University of Tehran before moving to Canada, where she earned her MFA in Film Production from York University. Razavi has written and directed several short films that have been showcased in numerous countries across the world. Mahsa’s short films A Celebration (2019), Roj Means Sun (2016), and Ahu (2021) have been shown on CBC and at the Boston Museum of Fine Arts, Canadian National Screen Institute, Iranian Short Film Association Awards, Reelworld Festival, Flickers’ Rhode Island Festival, Tehran International Short Film, and used in school curricula in Canada and the US. She is currently working on her first feature film script, The River Will Carry Us, set in Toronto and funded by Canada Art Council. Razavi’s works often focus on female experience, issues of individual-community, migration narratives, loss, and belonging.

Britt Kerr is an independent producer and consultant based in Halifax. She built the foundation of her career working in accounting and commercial banking, transitioning into the film industry in 2015 as a Production Accountant. She earned her Master of Business Administration (MBA) from Dalhousie University.

A lifelong cinephile, Kerr felt a natural pull to the creativity and complexity of producing. She completed the CMPA Production Mentorship Program (2016-2017) and worked for two years as Director of Development of Holdfast Pictures (Weirdos) before incorporating Brass Door Productions in 2019.

She has since produced three feature films, including Ashley McKenzie’s sophomore feature Queens of the Qing Dynasty (2022). She is currently in pre-production on There, There, Heather Young’s follow-up to her acclaimed debut, Murmur.

Kerr served for two years as Chair of Women in Film and Television - Atlantic (WIFT-AT) and is a founding member of the WIFT Canada Coalition.

Alona Metzer is a Toronto-based producer and a graduate of the Canadian Film Centre’s Producers’ Lab. Her passion lies in collaborating to create work that sits at the intersection of art and entertainment. Learn to Swim, her debut feature directed by her long-time collaborator, Thyrone Tommy, received its World Premiere at TIFF ’21 and was selected as one of TIFF Canada’s Top Ten films, and earned her a nomination for the CMPA’s Indiescreen Emerging Producer Award. It went on to receive a Canadian Screen Award nomination for Best Actor for Thomas Antony Olajide, and won the award for Best Original Song for “And Then We Don’t” written by TiKA and Casey Manierka-Quaile. Learn to Swim was produced in participation with CBC Films, and was released in Canada by Mongrel Media and internationally by Ava DuVernay’s ARRAY, which saw to the film’s release on Netflix.

Born in Aleppo, Syria, Teyama Alkamli is an award-winning Syrian Canadian writer, director, and producer living in Toronto. Her visually tender and deeply human work deals predominantly with issues of identity, sexuality, displacement, and migration. She is an alumna of DocNomads, the European Mobile Film School, Hot Docs Emerging Filmmaker Lab, and the Canadian Film Centre’s Director Lab. Alkamli is a current recipient of the TIFF Talent Accelerator Fellowship. Her latest work, Hockey Mom, is a mid-length documentary currently available to watch in Canada on CBC GEM, and was awarded Best Documentary Program at the 2021 Canadian Screen Awards. She is currently developing her narrative feature debut, Sing to Me Before the World Ends.

Berkley Brady is a Métis filmmaker currently based in Calgary. She has directed for TV, commercials, music videos, and shorts and recently premiered her first feature film, Dark Nature, at Fantasia 2022. She has an MFA in Directing from Columbia University in New York, a sweet husband, and is a new mom to son Cullen Brady Lister. She enjoys reading, adapting novels to the screen, and old corvettes.